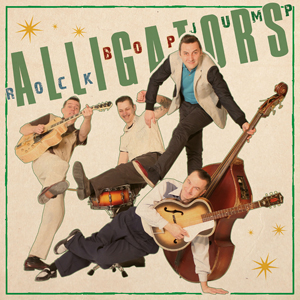 I first met The Alligators around 5 years ago when my old band The Sharks played a show in Moscow. The Alligators were on the bill. Oleg the front-man showed us around Moscow and we loved it. It's a time I will never forget and something I will always be grateful for. We stayed in touch and Oleg expressed an interest to record at Western Star studio. However, our schedules never really quite lined up and after much frustration we agreed it best for the band to record in Moscow.

Some time later Oleg contacted me asking if it was possible to mix the album at Western Star, but for reasons of systems compatibility and schedule I wasn't able to book him in. However, I did have a solution. I was able to put the band in touch with a trusted college of mine, someone I've worked closely with for many years and a man who is, in my opinion, one of the best recording engineers in the UK: Martin Nichols. A mixing session was arranged and Oleg travelled to the UK to oversea the mix. The results are simply stunning.

One on of the many things that strike me about this album is the song writing. It's first-class. The band are great performers and their songs sit so well alongside the carefully selected cover versions. The sound on this CD is amazing too and so it wasn't a hard decision for me to release it. Even though I didn't record this album, I feel very connected to it and I've played it a million times in my car since I got the final mixes.

The Alligators are one of those rare bands that despite their geographical location, seem to capture the authentic US 50s Rockabilly sound so perfectly. I honestly love this album.